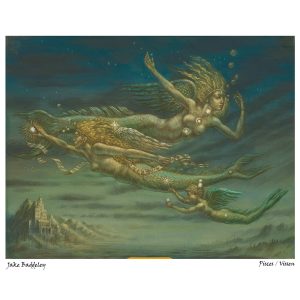 The Zodiac
At heart I am a traditionalist. It seems that in todays art world that this is nonconformist and exceptional. If you look at contemporary representations of the zodiac, it seems that in the search for originality and freedom of expression the core message of the zodiac is being lost. I wanted my work to be an continuation of an ancient tradition, and to preserve the knowledge it contains. Not being an astrologer, I knew nothing about the underlying meaning of the zodiac symbolism. So I spend a year researching as much as I could into what is still known and not yet forgotten, about this rich and deep subject and to put this into pictorial form. The biggest problem I found was that meanings change through time so that every culture had left their own mark on the development of the zodiac. It began to look like there was no single true form at all, until out of this diversity there began to emerge a relative unity.
The other problem was simply the sheer age of these symbols. They emerge from pre-history in proto-form, challenging us to even guess at their original meaning. What is clear is that they represented the earliest pantheon of deities before they were usurped by the planetary anthropomorphic Gods and were seen to have power over human affairs.
I decided to base the composition of each painting on the actual star constellation as seen in the sky. This has been the basis of all the images. In the right order then, the twelve paintings represent the sky seen as it passes overhead, throughout the year. The sky in the sun’s path. Over this template I lay symbolic representations that for me encapsulated the essence of what each sign is meant to represent. I tried to find the most authentic and original symbolism for each sign by delving into the historical record. Also, I wanted to insert the zodiac symbol the glyph, wherever possible into the composition, giving each picture many layers of meaning. Of course this was only the technical aspect of the artworks. Further more I had to create a unity within the whole series as well as keeping it in my own style. It turned out to be quite a challenge.